Dead animal removal in New Jersey. It is only normal for a foul odor to be unpleasant, but it can be so unpleasant when you talk about a dead animal on your property. This can be a menace if you already have a problem with animals dying right in your home, compound or even in your attic. Also, the carcass of these animals can attract other animals or even pests. Animals dying in the home is something that cannot be avoided but how it is managed, is what is vital.

As bad as it could be, these animals do not just die in plain sight where you can spot them and get rid of the body, instead, they usually crawl into someplace secluded, dark or even between walls and die. For this reason, dead animal removal NJ sometimes have callers who assume that a foul smell in their home means an animal died in the home, somewhere in the basement or attic, but funny enough at other times this smell could be coming from outside the home. It is only natural for the smell to diffuse through the air into the home.

This is a process of elimination by inspecting for dead animals and determining what animal is the likely cause and it’s where about, and this is often where we begin. Dead Animal Pick up New Jersey offers Something wonderful to its service and not just that they remove the carcass of the animal, but also totally eliminate traces of the smell as though nothing ever died there. As much as eradicating the smell is good because no one wants to smell a dead animal, eradicating this smell helps prevent the presence of other animals that it could attract. Additionally, Animal Carcass New Jersey can also cover up the smell of animal urine; this can also attract other animals in the area if not done.

Some of these animals or insects that can be attracted by this carcass are vultures, worms, flies etc. worms feed off on this carcass. These are not the kind of things wanted in the home because they most definitely can be a huge nuisance, frustrating as well, especially when they reproduce and become so many and out of control. Not forgetting that these animals or insects synthesize things that could cause diseases or transfer parasites to humans.

Dead Animal Pick up in New Jersey always makes its caller understand some of the risk of having a dead animal in the home and how poor management of these dead animals can be very unhealthy. Some of these risks are:

Generally, it is unhealthy and potentially risky for homeowners to get themselves involved in the removal of dead animals either from the ceilings, the walls, attic, outside the home or any other space likely to find a dead animal. Apart from the unpleasant smell these carcasses bring when removing them, the risk of being infected by one disease or the other or becoming the new host of a parasite formerly on the body of the animal is what makes the whole removal process unsafe, and the reason a professional animal carcass removal in New Jersey should be sorted for.

Who Should I Call to Remove Dead Animal in New Jersey?

Picking up a dead animal from the home is a responsibility of the homeowners and not the township. But should you need help with that, then you can call us today. As a homeowner calling for dead animal removal in New Jersey, you should understand that we are a private company and our services do come with a charge, however, should you see a dead animal by the roadside or on a public property then call your town, our services are strictly private.

Our team for dead animal pick up in NJ have the necessary training, expertise and tools/equipment to effectively carry out this removal safely. Time is taken to properly dispose the animal carcass in accordance with all guidelines and also to properly disinfect the area to keep it free of any odor or bodily fluid as well as possible parasites.

Signs You Need Professional Dead Animal Removal in Your Home or Business.

When you begin to experience these things, you know “Animal Removal New Jersey” should be the professionals to call.

How to Locate a Dead Animal?

This is the part where a professional is really needed because the major problem faced with dead animal removal is first locating the carcass. This requires a lot of knowledge and insight into the habits and biology of animals when they are alive. Having such knowledge of animals’ habits and biology when they are alive, now one can begin to anticipate movements and possible spots of the animal – this is a vital step in finding and removing the animal carcass. Here are more steps that could be helpful in finding out the location of the dead animal:

Our technicians for dead animal removal in New Jersey is available to take care of this whole process even more effective given their expertise. Our approach will be very swift using the quickest possible method of locating and removing the dead animal. Our vast experience in this industry makes us undoubtedly perfect for the job.

At Animal Removal New Jersey services for animal carcass , we do not only find and remove the animal carcass but also clean up, deodorize and disinfect the area. We use green, non-toxic, biodegradable product that helps to completely get rid of this odor and not just cover it up. Generally, a hired professional takes care of this whole process much faster and effectively; you would literally have no part to play asides paying for the service.

It is important to understand that, one key strategy our animal removal experts employ is their extensive knowledge of animals and our behaviors towards dead animal removal, no matter the animal species; a rat, squirrel, fox, deer, opossum, raccoon, skunk, groundhog, duck, goose, rabbit, bird or even a stray cat or stray dog.

It should be evident by now that we are an expert dead animal pick New Jersey company, and we are on standby for all your animal removal needs. If you smell something foul and unpleasant in your home and you need it to be gotten rid of, then do not hesitate to give us a call and we would be at your service.

Animal Removal New Jersey is a private company. A family business with over 20 years of experience. We specialize in dead animal removal.

Learn more about our company. 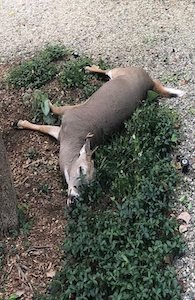 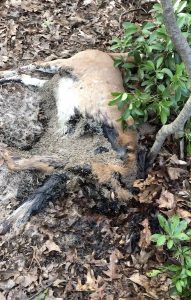